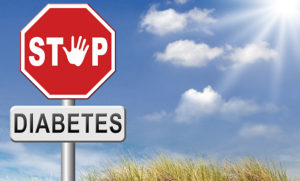 Diabetes is a metabolic disease characterized by a high sugar (glucose) level in blood and urine due to an imbalance in insulin activity related to the production of insulin in body or it’s absorption in the cells. Insulin is a hormone secreted by the pancreas located in the stomach and connected to the small intestine and spleen. One of the functions of insulin is to allow the entry of sugar (glucose), which is a source of energy in the body, into the cells.
After you eat food and your blood sugar level rises, cells in your pancreas (known as beta cells) are signalled to release adequate quantity of insulin into your bloodstream in order to move the glucose present in the bloodstream into the cells. As glucose removed into the cells, glucose level in the blood is dropped.
Insulin helps balance out blood sugar levels and keeps them in a normal range. If your body does not produce enough insulin or your cells are resistant to the effects of insulin, you may develop hyperglycaemia (high blood sugar), which can cause long-term complications if the blood sugar levels stay elevated for long periods of time.
Another condition that can be developed is hypoglycaemia characterized by abnormally low blood glucose levels, which affects the supply of glucose to the brain and is expressed in blurring, unclear thinking and unclear speech. Causes of hypoglycaemia are injecting an excessive amount of insulin, taking pancreatic pill without eating enough carbohydrates, physical activity without adequate carbonate coverage.

What types of diabetes?

Type 1 diabetes is also known as “juvenile diabetes”.
This type of diabetes is caused by the destruction of pancreatic cells by antibodies that produced by the immune system of the body. This happens due to genetic tendency or viral infection. As a result, the amount of insulin secretion goes down to a certain threshold, and is insufficient to put the sugar into the cells of the body. The body cannot produce insulin, and the only treatment is insulin from an external source. When diabetes is discovered, only a few insulin-producing cells remain in the patient’s pancreas.
Type 1 diabetes can occur at any age, especially in children and adolescents. 10% of all diabetics have type 1 diabetes.
Type 2 diabetes:
Type 2 diabetes occurs due to partial failure of the beta cells in the pancreas to produce insulin and / or insulin resistance, which means insulin misuse. In this condition the body cannot produce or use insulin correctly. This disorder can be accompanied by obesity, a disturbance in blood lipids and high blood pressure. Type 2 diabetes occurs in 90% of all diabetics.
Gestational diabetes:
Gestational Diabetes is type 2 Diabetes, which begins in the second trimester of pregnancy (as opposed to pre-gestational diabetes, which is found in the early weeks of pregnancy).
It is caused by the anti-insulin hormones secreted by the placenta that are blocking insulin activity. And that’s why blood sugar levels raise. There are women whose bodies respond appropriately to the placenta activity and there are women who develop gestational diabetes. In women who had subclinical insulin resistance before pregnancy, it is likely that they will become clinicians during pregnancy. In most cases gestational diabetes passes after birth. The risk factors for gestational diabetes include high birth weight, family tendency, old age, high blood lipids, diabetes in previous pregnancies, and lack of physical activity. Gestational diabetes is diagnosed by glucose challenge test between 24 and 28 weeks of pregnancy. In many cases, a change in lifestyle that includes proper eating and exercise, is sufficient to balance gestational diabetes. Sometimes insulin therapy should be added.
Untreated diabetes has several risks:
1. Hypertension of the pregnant woman
2. Multiple amniotic fluid
3. Intrauterine mortality
4. Overweight
5. Hyperglycaemia of the fetus during pregnancy
6. Postpartum hypoglycaemia
A woman with gestational diabetes should be monitored by a high-risk pregnancy clinic that includes a gynaecologist with a specialty in high-risk pregnancies, an endocrinologist and dietician who specializes in diabetes.
Gestational diabetes occurs at a frequency of 2-4 percent of pregnant women.

Other causes of diabetes:

Diabetes may occur as a result of different conditions such as genetic syndromes, exposure to chemicals, exposure to drugs, malnutrition, infections, various viruses and more.

The main symptoms of diabetes are high blood sugar, increased thirst, frequent urination, weight loss, hunger, and acetone odour from the mouth.
In the case of type 1 diabetes, especially in young people, symptoms appear sharply and clearly.
In the case of type 2 diabetes, the development is slow and gradual, and not all symptoms appear in the early stages.
And therefore it is advisable to conduct periodic tests for early detection in order to prevent aggravation and complications.

According to the International Diabetes Federation (IDF) Diabetes is a disease that affects 371 million people worldwide, and 187 million of them do not even know they have the disease.
Most people that have diabetes are adults over the age of 40, and the risk increases with age.

The complications are similar to type 1 diabetes and type 2 diabetes and are mostly due to cumulative damage to small blood vessels and an imbalance in blood sugar levels:
– Eye damage that can lead to blindness.
– Kidney damage that can cause renal failure.
– Neural damage, especially in the legs, which causes leg pain (neuropathy).
– Damage to large blood vessels as a result of atherosclerosis.
– Vascular diseases that lead to brain blood, which can cause a stroke.
Peripheral vascular disease, which reduces the blood supply to the legs and causes walking pain, and in more severe cases necrosis and amputation of limbs.
Changes in blood vessels and nerves may cause, in the long term, problems with the legs, skin, joints, digestive system, and the life of the woman.
Studies conducted in recent years have shown that complications can be prevented by maintaining as close as possible to normal levels of sugar and maintaining a healthy lifestyle: proper nutrition, exercise and cessation of smoking.

What is diabetes treatment?