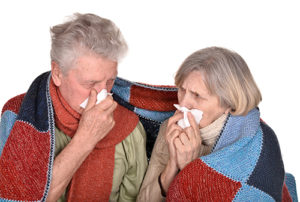 Influenza is a most common viral diseases in the world and characterized by large-scale seasonal outbreaks. The cause of the disease is the influenza virus transmitted from person to person through the airways or contact with objects or surfaces infected with the flu virus. Every year there is an increase in seasonal sickness, which reaches a peak in the winter.

The disease characterized  by fever, muscle aches, headaches, coughing, diarrhea, weakness and general bad feeling. The symptoms are sharper than those of a common cold, and may also be accompanied by sore throat, inflammation of the eyeballs, and increased lymph nodes in the neck.The symptoms of the flu are disturbing and unpleasant, but they go away most often after a few days or nearly week. The problem of the disease as opposed to other viruses mainly in its possible complications, including complications from pneumonia,bronchitis, ear infections, nervous system complications, flare-ups of background diseases.

There are 3 types of RNA viruses that cause influenza type A,B and C.

Human influenza type A and B so called  “ flu “ cause the annual epidemics with symptoms like sniffling, aching, coughing, and running high fevers.

Type A influenza viruses capable infecting animals as well. This type of virus is changing and can cause to large flu epidemics and is spread by people who are already infected.

Influenza A viruses can be further broken down into different strains.

Type B virus is found only in human and can cause less reaction and do not cause pandemics, but still can be harmful.Influenza B viruses are not divided into subtypes, but can be further broken down into lineages and strains.

Influenza C viruses are also found in people. People generally do not become very ill from the influenza type C viruses. And this type of viruses do not cause epidemics.

Who is at risk?

Influenza can affect the general population but there are populations at increased risk for complications.. Risk groups for example:

Adults over the age of 50

Pregnant women, women who plan pregnancy or after childbirth

Population groups that may transmit influenza to high-risk people

People who have been hospitalized for flu, flu-like illness, or previous pneumonia.

One of  important step in preventing flu is to get a flu vaccination each year. CDC studies shows that getting vaccination reduces risk of hospitalizations and disease complications. CDS also recommends everyday preventive actions (like staying away from people who are sick, covering coughs and sneezes and frequent handwashing) to help slow the spread of germs that cause respiratory (nose, throat, and lungs) illnesses, like flu.

Influenza vaccination is the most effective way to prevent the disease. Studies by the leaders of the National Program for Quality Indicators in the Community shows that the higher the rate of immunization in the population, the lower the rate of hospitalization for influenza and its complications.

How do flu shots work

Flu vaccines that contains viruses cause to development of antibodies , helping the immunity to imitate the infection. The vaccine itself doesn’t cause the flu, but does take about two weeks to start working.

The flu virus changes every year:

For this reason, vaccine manufacturers make up a new vaccine each year according to estimates of virus changes, so the disease must be re-vaccinated each year.

Do flu shots have side effects?

The Most common  side effect of the flu shot is the reaction at the injection side. Some redness or slight swelling can be appeared. These effects disappear after few days. Some can experience headaches or pains in the muscles. Less common side effect that can be appeared in some people is slight fever.

All these effects go away after 2-3 days

What are the benefits of flu vaccination?