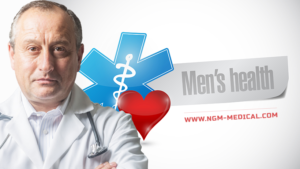 June is Men’s Health Month and we share education and awareness about men’s health issues. Increasing awareness of men`s health issues, of preventable health problems and encouraging early detection and treatment of disease is to get more men to go to the doctor on a regular basis. The statistics are staggering: seven million American men have not attended a physician’s appointment in more than 10 years. The survey discovered that 22 % of men never discuss health topics with anyone—including their spouses and children. Sadly, it’s common for men to put more energy into avoiding the doctor’s office, rather than taking care of their health. The doctors point out that the life expectancy for men is at least 5 years less than it is for women, and of the top 10 causes of death in the U.S., men are more likely than women to die from 9 of them.
In general, men have poorer health habits and are less likely to take preventive health steps than women. Every man can use a little advice on smoking, hangovers, diabetes, work, and fitness. When they do get medical attention, they often cancel follow-up appointments, don’t finish their prescriptions, and play down the seriousness of illnesses and diseases.
Men are also more likely to smoke, drink alcohol, and make risky choices, such as not wearing a seatbelt. Men are about 60% more likely than women to die of heart disease and over 40% more likely to die of cancer. In their 20s, men are too tough to see a doctor. In their 30s, they’re too busy to take time for preventive care. In their 40s and beyond, they’re too afraid of what they might find out. Let the men in your life know that preventive care is important for everyone — even if they feel fine — because it catches problems early when they’re easier to treat. Getting the right screening test at the right time is one of the most important things a man can do for his health. Screenings find diseases early, before you have symptoms when they’re easier to treat. Even if you feel perfectly healthy, you should see your provider at least once a year for a checkup. By taking better care of themselves men can boost their odds of living healthier, longer lives. Schedule appointment at New Generation Medical and don’t be afraid to ask your doctor about testicular pain, man boobs, impotence, anal itch and other embarrassing male problems.