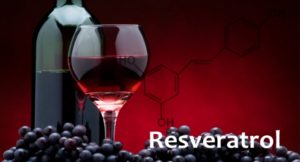 Have you ever heard of anyone drinking red wine for the health benefits and wondered what makes red wine healthy? Researchers and scientists around the world have discovered the answer in recent years and found that one of the main healthy ingredients in red wine is RESVERATROL. Resveratrol is a polyphenol found in the skin of red grapes that is naturally produced in grapes and other plants IN response to stress, injury, and radiation. The antimicrobial properties of resveratrol help to protect the plant under these harmful circumstances.

Resveratrol became well known in the 1990’s as a result of the studies surrounding the French Paradox; the observation that the French, while consuming a high-fat diet, still had a very low occurrence of heart disease compared to other countries. Researchers suggested that the factor lowering the occurrence of heart disease may be the higher consumption of red wine by the French. As a result, the possible health benefits of red wine were studied which led to the focus on resveratrol as the key component to the health benefits of red wine.

Resveratrol extends lifespan of many species, most recently shown in mice fed a high calorie diet.
Additional study of genes in these animals suggest resveratrol works through various mechanisms including those that alter energy metabolism and cell survival.*
In studies of lifespan and aging in vertebrates, other positive effects of resveratrol were also shown:
Maintenance of nurocognitive function*
Improved balance, sensory-motor coordination and endurance*
Improved insulin sensitivity*

Resveratrol appears to have a similar effect on genes as caloric restriction, a model known for reducing the effects of aging.*

With more and more people choosing exotic destinations and embarking on adventurous vacations, we wish to remind you of the importance to travel well-protected. The World Health Organization (WHO) advises all travelers to consult with their doctors 4-6 weeks before departure. Each year, 40,000 Americans die of diseases that could have been prevented by routine adult vaccines.
Also, make sure you talk to us about malaria and diarrhea tablets and remember to pack your sun-screen, your prescription medicines and a comprehensive first-aid kit.

Here is a list of recommended vaccines that we have available at Manhattan Family Practice:

Please note that most travel vaccine fees are not covered by insurances. Payment is due in full at the time of vaccination.

The vaccine ModernaTX is finally here!

THE VACCINE IS FINALLY HERE!